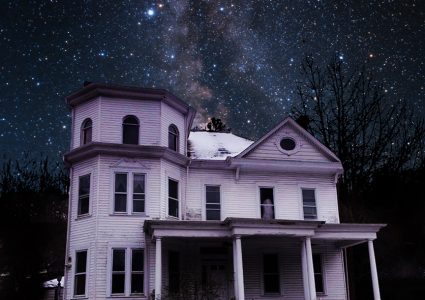 The Haymond House is a Queen-Anne style home built in 1894 and remains as a lasting tribute to the works of a prominent attorney and regional booster, Willian Haymond. Although altered on the exterior with an application of siding, the house maintains enough integrity to reflect its historic appearance at the time of Haymond’s residence. The house features rich interior craftsmanship and rare decorative materials.

Not long after the current owners purchased the home in December of 2019, they began encountering strange and unexplained phenomena. Such events included seeing a six-inch oval orb for several minutes in the basement, hearing footsteps pacing on the second floor, A “women in white has been seen by several observers on the second-floor walking between rooms. There has been a tall slim grey figure seen throughout the house, and a smaller shadow figure has been seen on the second floor. This home has a warm and inviting atmosphere, says the new owners. Guests are welcomed, not only by us the hosts but also by the spirits that dwell in the home.

Take a deep dive into the history of the Haymond House as well as what to expect today, with paranormal investigator, Dave Spinks: